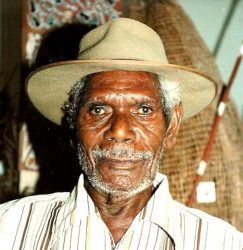 David Malangi, who began painting in the early 1960’s, played a vital role in the development of the contemporary Aboriginal art movement and became, during his lifetime, one of the great inspirational figures of Arnhem Land art. While, for many older Australians, he is best known for the image that featured on the now defunct one-dollar note, he was also a traveling ambassador for his country and his people and achieved worldwide recognition for his innovative yet deeply tradition-based bark paintings. He was born at the mouth of the Glyde River in Central Arnhem Land and like many of the Manharrju people, divided his time between periods at the off-shore Milingimbi mission and extended stays in his own country on the mainland, where he and his family lived according to traditional law. He often worked on the mission as a garden labourer and caring for livestock. He had been painting for ceremony since his teenage years but, after the death of his father in the late sixties, he became apprenticed to the ceremonial leader Ghawadanygulili. He soon took a more serious approach to art as a career and painted for a growing audience outside of his tribal group. He had already been painting for more than fifteen years when, in 1979, he became a founding member of the Ramingining Arts and Crafts centre, later called Bula Bula Arts. This enabled him to paint full time.

In 1966, after Paris-based collector Karel Kupka purchased his work for the Musee National des Arts d’Afrique et d’Oceanie in Paris, Malangi’s bark Mortuary Feast 1963 was noticed by the Australian Reserve Bank and, without his permission, used as a design for the new one dollar bill. The design depicted the funeral of the first man, the hunter Gurrmirringu, who lies in state surrounded by seated song men with clapsticks and didgeridoo, ensuring that the ancestral spirit arrives safely at his final destination. Surrounding the group were the animals representing the hunter’s catch and his final funeral feast. The white berry tree, with its ordered rows of berries and leaves, structured and framed the picture while at its roots lurked Dharpa, the King Brown Snake, the evil spirit whose bite had killed Gurrmirringu. This image depicted the occasion of the first death and how Gurrmirringu’s spirit came to watch over the Manyarrngu people.

As this Dreaming myth was of sacred significance and Malangi felt responsible as its custodian for the theft, he was deeply upset when he eventually saw it. At this time non-Indigenous Australians considered that, as Aboriginal art was communally owned, individual copyright should not apply in law. It would be many years and many individual legal cases before Indigenous copyright would be established, however the publicity that was generated by David Malangi’s anguish played a vital role in stimulating the debate about Aboriginal intellectual rights both legally and morally. He was eventually awarded a specially struck medal and paid one thousand dollars for the design. The governor of the Reserve Bank, Dr. Nugget Coombs who presented these to him, became his lifelong friend and went on to become a legendary figure in Australian politics and a tireless advocate for Aboriginal land rights and self-determination.

During the 1970’s and 1980’s Malangi began to take aspects of the Gurrmirringu myth and explore new compositional possibilities in individual paintings, often setting the scene with the plants and animals before the grand event. His style was unmistakable with its masterly draughtsmanship, rich natural pigments and captivating composition. His bold, iconic depictions of ancestral beings became established figures in the Australian psyche. Another focus of Malangi’s work was the mapping of his mother’s country, Yathalamarra, through the journeys of its mythic ancestors. In tracing their travels he depicted the sacred sites and life giving waterholes they created as they passed; the plants and animals they named; and the ceremonies and religious knowledge they provided in order to assure both the physical and spiritual sources of human sustenance.

By this time, Aboriginal art was entering the forefront of the Australian art scene, generating great international interest and becoming sought after as representing an extraordinary and unique cultural heritage. Malangi was a key figure in these developments. He was one of the first Aboriginal artists to be included in the Sydney Biennale and in 1983, his suite of paintings in Australian Perspecta at the Art Gallery of New South Wales, constituted an incontrovertible land rights statement that later contributed to a successful claim by his people. He was sought out to participate in other major exhibitions and events, including the New York exhibition Dreamings: The art of Aboriginal Australia, 1988, and the permanent Aboriginal Memorial 1988, at the National Gallery, Canberra. In 1989, twenty three years after his Mortuary Feast design had been used without his permission, Malangi again played a pivotal role in the benchmark case that finally, and for all time, established copyright for all Aboriginal artists. He was awarded an Honorary Doctor of Laws by the Australian National University in 1996 and two years later received an Emeritus Award from the Australia Council. Doctor David Daymirringu Malangi was now world famous but still lived with his four wives in the beautiful freshwater region of Yathalamarra, his mother’s country, painting diligently and encouraging his many children towards art and education.

Late in his life, during the 1990’s Malangi, in a way reminiscent of Henri Matise and Constantin Brancusi, distilled everything he had ever wanted to say into the most iconic simplified imagery. Two of these remain the most indelible and powerful statements about the connection between Aboriginal people and their land. Luku, meaning foot but also root, depicted the footprint of Malangi’s ancestor Gurrmirringu. The other, which was other most likely the last painting he ever created, depicts in black and white with simple yellow outline, the encrusted mud at Dhamala. Both denote Malangi’s connection to the subterranean domain, the spiritual source of all worldly beings and of the country that holds them. For Malangi, this was the ever-present awareness that had always fuelled his generous and deeply creative soul. In 1998 the entire community, from the youngest person to the oldest, paraded to a gathering outside Bula Bula Arts to celebrate David Malangi’s ‘retirement.’ Elders led every clan group in their own totemic dance in paying honour to Malangi as he sat, resplendent in white, surrounded by his large extended family. It was, for all who participated, an incredibly moving occasion. He passed away the following year, greatly missed and very fondly remembered by friends and a large number of far-flung admirers.

Five years after his death, a major retrospective exhibition of his works, No Ordinary Place: The Art of David Malangi, was held at the National Gallery of Australia in Canberra and toured to the Museum and Art Gallery of the Northern Territory, Darwin.

David Malangi Daymirringu (1927-1999), Djinang (Yolgnu) bark painter, printer and designer, was born at Mulanga, near the mouth of the Glyde River, just before Christian missionaries arrived on the nearby island of Milingimbi. For some years he painted only for ritual purposes, but in the 1960s he began painting commercially as well. In 1966 he gained nationwide fame when one of his paintings was reproduced on the new $1 note (without his permission). In 1979 Malangi and fellow Ramingining artists George Milpurrurru and Johnny Bonguwuy became the first Aboriginal artists to show their work at the Biennale of Sydney. His work featured in Australian Perspecta (AGNSW, 1983) and Dreamings in New York in 1988; he travelled to the opening of the latter with Jimmy Wululu. Malangi created ten poles for the Aboriginal Memorial and was one of three Yolgnu people who sang the work into place at the National Gallery in 1988. In 1997 he received an Australia Council Award, and in 1998 an honorary doctorate from ANU. The NGA mounted No Ordinary Place: the art of David Malangi in 2004.

The reproduction of one of his designs appeared on the reverse of the Australian one dollar note in 1966. This was done originally without his knowledge, acknowledged in 1967 with the release of the Australian one dollar note, he was later financially compensated after intervention by the Governor of the Reserve Bank, Dr H. C. Coombs, as well as receiving a specially struck medal. The image depicts the mortuary feast of the ancestral hunter Gurrmirringu.The payment by the Reserve Bank to Malangi began issues of Aboriginal copyright in Australia.