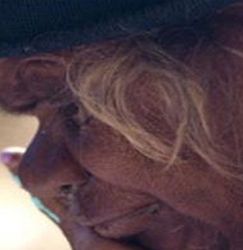 Born at Yarungkanji, Mt. Doreen Station, northwest of Alice Springs c.1925, Judy grew up hunting and collecting bush tucker while travelling on foot with her family throughout the vast Warlpiri country that lies between the Tanami and Gibson deserts. Her traditional nomadic lifestyle came to an end however when the Warlpiri, like other desert tribes, were forced to live a bleaker and more constricting lifestyle in the new government settlement. Much later, after ten children and difficult times of adjustment to the European lifestyle, the influence of those early years spent walking through the land of her ancestors burst forth in her art works; her principle focus being the women’s dreaming of Karnta-kurlangu and the land created by these ancestral beings. This Dreaming is principally connected to the women’s country at Mina Mina, west of Yuendumu and close to the large saltwater expanse of Ngayurru or Lake Mackay. It was here that the digging sticks emerged magically from the land, equipping a large number of ancestral women with both the tools for survival and of totemic power. The women proceeded to dance across the land, sometimes in single file, creating important sites, discovering plants, foods and medicines and establishing the ceremonies that would perpetuate their generative powers. The dancing women wore hairstring belts (Marjardi) and tassels rubbed with red ochre and fat to emphasise their passion and power. They danced with enthusiasm and great enjoyment. The potent life force with which they imbued the country is evoked in Judy’s love of colour and richly textured, drag-dotting style which traces the sinuous lines of dancing women crossing the country. Inter-related dreamings that Judy depicts are Ngarlyipi (Snake Vine), Yunkaranyi (Honey Ant), Jintiparnta (Native Truffle).

While the modern painting movement at Yuendumu was once largely associated with the murals painted by senior men on the school doors in 1984, women had been industriously involved in art and craft production for both financial and cultural reasons even prior to this event. Amongst the first to achieve recognition were the sisters Maggie and Judy Watson, who became Yuendumu’s most significant and successful female artists. Maggie died in 2004 and it fell to Judy to continue passing on the shared knowledge of their sparse and arid desert homeland. Judy’s specifically female Dreamtime stories provide a complex schema of human interaction with the land and a vibrant celebration of its underlying spiritual origins. From ancient times these stories have been passed on to succeeding generations of women giving instructions for both physical and spiritual survival in this challenging environment. This connection with the ancestors remains vital, Judy believed, even though the challenges faced by the Warlpiri people today have greatly changed.

The gender shift that has seen desert art developed and sustained by women artists, as opposed to once predominantly male artists, stems from a complexity of reasons. Before the 1980’s, art produced by women was often discounted as being less culturally important or simply decorative and supplementary. The bias of European male anthropologists had construed female Dreaming stories as secondary to the seemingly all-encompassing male creation myths. This was however, largely a matter of perspective as traditional Aboriginal societies considered female knowledge to be the other half of an indivisible whole. Through the 1980’s new political initiatives and the influx of women art advisors brought attention and resources to female artists. Experimental art and batik workshops for women were hugely encouraging and promoted a sense of creative freedom less encumbered by the ground rules put in place by the men to protect the emerging industry. The innovative approach attracted art buyers and their success encouraged more women artists across the desert communities. Following in the footsteps of her sister Maggie, Judy began creating paintings for Warlurkurlangu Artists in 1986. The extraordinary exuberance of her work with its unrestrained use of bright, sometimes clashing colour, splashed across the art world like the ‘Shock of the New’.

After Papunya, Yuendumu had been the second desert community to embrace the new art initiative. The artists of Yuendumu took to the new acrylic colours with an innovative spirit and became known for their use of ‘wild and inventive’ colour. For the Napangardi sisters, brilliant colour provided the means of activating the surface of the canvas and conveying the sense of animated movement. Thus introduced technology, rather than eroding cultural values, became a means of  re-invigorating a centuries old spiritual connection to Country, consolidating the strong and resourceful Warlpiri identity.

Her works were included in group exhibitions from the early 1990’s onward at many important galleries most notably Sydney’s Hogarth and Coo-ee Gallery; Alcaston, Gabrielle Pizzi, and Sutton Gallery in Melbourne;  Raft Artspace, Framed Gallery and Gallery Gondwana the Northern Territory; and Japingka and Indigenart in Perth. Yet despite having painted for almost two decades it was not until 2004 that Judy had her first solo exhibition for Alcaston Gallery and since that time they have featured the artist’s works continuously. Her work importantly graced the cover of the National Gallery of Victoria’s 2004 catalogue for the exhibition Colour Power – Aboriginal Art Post 1984 and since that time Judy had participated in a number of important print projects with Northern Editions and the Australian At Print Network; most notably the Yilpinji folio of Love Magic images by 15 Warlpiri artists from Yuendumu, Lajamanu and Balgo Hills.

Judy Watson was a widely acclaimed and highly visible artist. She divided her time between Yuendumu where she painted for the Warlukulangu art centre, and Alice Springs where she worked with a number of dealers including Peter Van Groessen who is married to one of Maggie’s daughters and Geoff Henderson who was during the last stage of her life the most prominent independent supporter of her art practice. Judy was unmoved and unaffected by the contemporary politics of desert art, happy in the knowledge that there were a number of places she could go and be paid well for her art thereby supporting her large extended family through the sale of her works. She simply did what she loved, applying electric colour fields in liquid paint on canvas. ‘Painting makes me in touch with my ancestors,’ Judy said, ‘My country, painting holds them all there,’  (cited in Genocchio 2008: 92). She passed away in 2016.