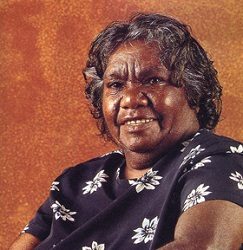 Born c.1940 three hundred miles northeast of Alice Springs, and instructed by her paternal grandmother in the Dreamings that inform her work, Kathleen Petyarre began painting in the mid 1980’s. Within a decade a series of important exhibitions, prestigious awards, and journalistic debate about Indigenous art praxis, had propelled her to international renown, if not entirely for all the right reasons.

While best known for her finely wrought, intimate renditions of the vast landscapes created during the epic journeys of her Dreaming ancestor, the tiny Thorny Devil Lizard, the process leading to these sumptuous paintings took years to perfect. Kathleen began her artistic career making batiks through community workshops run by adult educator Jenny Green. Informed by wider social currents of the seventies, the female group gathered a powerful artistic presence within the emerging Indigenous art movement of Central and Northern Australia. This carried over into the political arena, where Petyarre played an instrumental role in winning the 1980 land claim that returned the land around Utopia to its traditional owners. Green recalls how the demanding and finicky work of batik-making required ‘the patience, dexterity and determination employed in winnowing seed and collecting other bush tuckers’ (cited in Nichols 2001: 20). The women moved between their traditional and contemporary activities with ease and enthusiasm. Prompted by health concerns, Petyarre moved to acrylic painting as suggested by the new art advisor Rodney Gooch in 1986. Her fine working skills and focused attention carried over, as she began to explore her new medium.

Petyarre’s totem, the Thorny Devil Lizard, referred to as ‘that Old Woman Mountain Devil’ underlies and informs all of her work. This tiny desert creature is believed to have created the vast desert home of the Eastern Anmatjerre people by moving each grain of sand, grain by grain, since the dawn of time. Petyarre and her clanswomen believe that they are its descendents, and have therefore inherited the responsibility for caring and nurturing the vast landscape that she depicts so intimately and carefully in her paintings. In her My Country series, she uses thin acrylic paint that soaks into carefully prepared linen to create ‘galaxies of fine dots’ that build upon each other to produce subtle variations of tone and colour underscored by areas of compelling shadow. These vibrant surfaces remain sheer, yet soft, with rhythmic linear patterns suggesting life and structure upon the earth-toned expanse, as well as underground watercourses and a spiritual presence within. Many of these highly atmospheric works re-affirm an important link to the ceremonial body painting and dancing of her traditional life through both their energetic presence, cultivated by painstaking technique, and their oblique reference to secret, ancient narratives, carefully veiled by mists of dots. ‘I like to make the painting like its moving, traveling,’ she says, touching upon her ancestral wanderings. Working alongside her famous aunt, Emily Kame Kngwarreye, Petyarre became inspired to succeed her as ‘the most feted Anmatjerre artist’ and tailored her work to a cross-cultural sensibility, responding with intelligent acumen to an increasingly receptive market. Although structurally present in her cruder early works, she began concentrating on her Mountain Devil Lizard theme in earnest from the early 1990’s. This image, featuring two diagonal fault lines meeting at sacred men’s and women’s ceremonial sites along a dry river bed, became her leit motif and has been rendered with subtle and increasingly sophisticated nuances over the following years. Her career progressed quietly and steadily, encouraged by her agent, David Cossey of Gallerie Australis in Adelaide, until her sell out show in Melbourne in 1996. She was awarded the Visy Board Art Prize at the Barossa Vintage Festival Art Show in 1998 and the following year won the People’s Choice Award in the Seppelts Contemporary Art Award, held at the Museum of Contemporary Art in Sydney. Later that year, she won the biggest prize of all, the prestigious Telstra Aboriginal and Torres Strait Islander Art Award. Controversy regarding the authorship of her winning entry highlighted the communal nature of art production in her culture, springing as it does from an intensely inter-related bond between small clan groups, larger tribal groups and country. Although resolved in her favour, the lengthy investigation deeply upset Petyarre and her immediate family who sensed the threat to their birthright, an identity fundamentally shaped and given meaning through their Dreaming.

Petyarre’s belief in her vocation propelled her back to the artistic stage, however, with her mature works considered by many as her best. Less specific references to the features of country have promoted their abstract quality while still conveying their pervasive sacred meaning. A solo retrospective at the Museum of Contemporary Art in Sydney, as well as an accompanying catalogue published in 2001, repositioned Petyarre’s career, enabling viewers to reassess the artist’s work, free of the controversy that had flared during the three years since winning the NATSIA award. Received with plaudits, her biographer noted, ‘Kathleen Petyarre draws upon the indigenous to create the international’ (Nicholls 2001: 31).

On occasion, when in Alice Springs, at the mercy of a continuously needy entourage, she paints perfunctory paintings for quick money. However these should not be confused with the majority of her works created in the studio her agent provides in Adelaide. In this environment Kathleen Petyarre is at her best, continuing to make works of enormous integrity that will always attract a spiritually inquisitive and aesthetically literate audience.

Butler, Rex. April 2001. All and Nothing. Australia. Australian Art Collector 16.

James, Bruce. 2 June 2001. From the Sandhills to the Street. Australia. Sydney morning Herald.