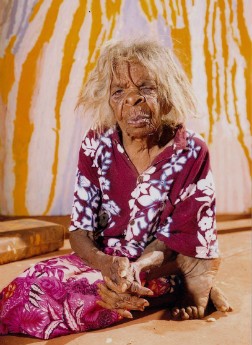 Makinti Napanangka walked in to Haasts Bluff ration depot during the 1940’s with her young son when in her early 20’s and by the time she had moved to the new settlement of Papunya had given birth to a daughter. Having been uprooted after encountering white men while still young, she later returned to her home country as the outstation movement gained strength, and settled five hundred kilometers west of Alice Springs, at Tjukurla close to Mangarri where she was born.

Although women had often assisted during the early years of the Papunya painting movement, painting had been considered an exclusively male project. Through the seventies, the male Pintupi painters had developed an austere and very precise mode of design that managed to convey the intensity of ceremonial artistry without revealing traditional sacred content.

The success of their Tingari paintings in particular provided the funds and confidence that Pintupi people needed to set up outstations and return to their much longed for country.

Like a number of her female tribeswomen, Makinti began painting independently many years later in 1994, when a women’s painting project was organized for the Haasts Bluff and Kintore communities. Away from their men folk and camped in a specifically female sacred site, the women re-affirmed their own traditional ceremonies and collaborated on large canvases that were soon to reveal a strikingly new creative charge. After the conspicuous deliberation of the men’s painting style, the women worked with a confident spontaneity that promised a wealth of new expressive possibilities. This event marked a major development in contemporary Desert art as many of the women went on to become full-time painters for Papunya Tula Artists and gained wide public acclaim. Makinti was by now in her mid-sixties and her bright palette, slightly impasto surfaces and loosely worked geometric compositions were immediately attractive to visiting enthusiasts and art buyers.

Makinti’s gestural style and bold line work was derived from painting with her fingers dipped in earth ochres onto her clanswomen’s bodies for ceremony. The tactile surfaces of her paintings reflect this touching and sensing, just as her painterly use of colour and form generates a sense of celebration and movement. Through these haptic surfaces Makinti maintains her cultural traditions while the images serve to revivify the journeying of her two ancestral female ancestors, the Kungka Kutjarra as they dance their way across the country. Their travels follow the desert water sources and, particularly in Makinti’s art, Lupulnga, the rockhole where she was born and where her connections to her spiritual origins are felt. Small ovoid roundels, often in linear sequence, denote this crossing of country. “Care for country” is an important motivation for this bond as the water sources must be cleared of debris and sand to keep them, and the life they support, fresh and flowing.

Towards the end of the nineties Makinti’s art began to focus more on long, loose linear ribbons of paint, inspired by the hair string traditionally spun and worn by women and connected to love magic, sexuality and allure. These bands of colour also hint at ‘the rhythm and movements of ceremonial songs and dances as well as the desert landscape itself’ (Ryan 2005). Dense patterns of curving lines predominate over smaller areas of tightly packed cellular shapes. Visual complexities tease the eye in an interesting overlap between highly structured areas and those that are painted more loosely. This more controlled approach coincided with a cataract operation that restored her failing eyesight and revitalized Makinti’s engagement with painting. Piling on the paint, she instinctively conveys her own sense of order amongst the vibrantly coloured profusion of yellows, oranges and various shades of pink. Her distinctive dabbing technique and long stroking brushwork carry over into rhythmic compositions that resound with an instinctive energy, full of life and enthusiasm. Although a tiny woman, Makinti commands a strength of purpose and a presence that has been vital in furthering the momentum of the desert painting community. She is recognized as one of Papunya Tula’s leading artists and in recent years has been named as one of Australia’s 50 Most Collectable Artists every year between 2003 and 2006 in Australian Art Collector Magazine. This recognition followed several important solo exhibitions held at Utopia Art Sydney in 2000 and 2001 and at Gallery Gabrielle Pizzi the following year.

Makinti Napanangka, until her passing in 2011, was the most senior woman of the elderly group, who are widely recognized as the top Pintupi painters. While she was a key member of Papunya Tula Artists, and her name was listed as a director of the company, she increasingly painted for a range of dealers in Alice Springs outside of the ‘company’ during the last years of her life. While many of her works produced for these alternate sources are equal to anything produced for Papunya Tula, the market, currently deeply concerned about provenance issues, does not think them of as highly. This was underscored when in 2008 she was awarded the National Aboriginal and Torres Strait Islander Art Award for a work submitted by Papunya Tula. While the award winning work itself may not have been her finest, those present overwhelmingly endorsed the award given the quality of her works over a sustained period. In making the award the judges demonstrated quite pointedly their own prejudice in favour of art centre provenanced works at a time when the public debate over independent dealers had reached its zenith.

Makinti was a committed and prolific artist, whose work has been widely exhibited and included in many important collections. At the time of her death she was one of the most highly respected custodians of women’s traditional knowledge in the Central Desert region and the standard bearer for the women artists of the region.