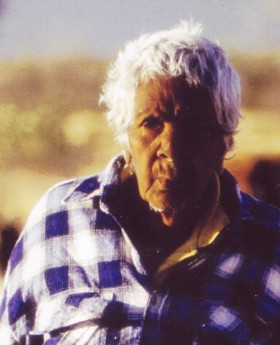 Born c.1922, in the Eastern Desert, Minnie Pwerle worked on the property and homestead of nearby pastoralists as a young girl and, and whilst still in her teens bore a daughter, Barbara (Florie), to Jack Weir, the owner of a neighbouring station. Jack was arrested and taken with Minnie and their child to Harts Range police station from which she walked the 600 kilometers back to her outstation with her baby in her arms. She spent the following years living in fear that her daughter would be taken away by ‘the native welfare’. Barbara was finally taken eight years later and did not return to Utopia until 1968, by which time Jack Weir had died, and Minnie had married Motorcar Jim, with whom she had six children.

Despite the batik workshops held in Utopia in the late 1970’s and the adoption of painting there by women as early as the late 1980’s, Minnie Pwerle is not believed to have picked up a brush until she had reached her late 70’s, in 1999. Minnie’s reason, given during an interview in 2004 was that ‘no one asked me to’. Such apparent shyness however is not at all evident in the canvasses she immediately began filling with gestural depictions of her country, Atnwengerrp, and its Dreamings. A collection of the first three hundered of these has been kept intact by Hank Ebes, the owner of Aboriginal Gallery of Dreamings, who helped to fund the earliest workshops at the time she began to paint. A chronological look through these early works demonstrates the surety and vigor of her stroke from the outset as she depicted the Women’s Ceremony, Awelye, and the once abundant Bush Melon and Bush Melon Seed in a way that reflects a strength of character built during a lifetime of dislocation and hardship.

Minnie’s career and that of the great Emily Kame Kngwarreye share many parallels. Both began painting in their late 70’s and both created work for a period of seven years. Despite a short early period during which Emily painted tightly controlled painstaking fields of tiny dots obscuring detailed iconography beneath, both painted the majority of their works equally gesturally and produced a prodigious output, generally thought to number in excess of 4000 individual works. Both artists painted works that were immediately popular, most especially amongst women, and were able to support a number of close relatives with the income they generated.

Indeed the comparison between the two women, who were sisters-in-law, extended to their fundamental feelings ‘of reverence, abandon… intuition-minimal fuss,’ as Sydney abstractionist Tony Tuckson phrased it (cited in McCulloch 2003). The manner in which they created their works appeared to be the result of an urgency to reconnect to the past and to keep the Dreaming a living reality. Just like Emily Kngwarreye before her, in painting after painting Minnie boldly and self-assuredly depicted the body designs painted on to women’s breasts and limbs for the regular ceremonial revivification of her country. While the rambling tuberous roots of the Yam or Bush Potato were Emily’s Dreamings and the subject of her art, Minnie’s primary focus was the Bush Melon and its seeds. Her Awelye-Antnwengerrp paintings drew directly from these ceremonial practices, depicting bush melon, seed, and breast designs in powerful multi-coloured brushstrokes that built in to a structured patchwork of luminous colour most often emanating from within a darker under-layer. The energy of these vibrant colourful works seemed to capture the joy of coming across these sweet bush foods, now scarce and difficult to find.

In retrospect, Minnie’s painting career reflects a sense of disorganisation and dislocation, given the absence of an art centre in the community during her lifetime. While family groups live on sixteen disparate outstations, the Arlparra store, where Minnie sometimes resided is still the sole unifying centre. Her first works were painted during a workshop organized by Barbara Weir’s son, her grandson Fred Torres, who became her principle dealer. Minnie, however, painted for many others, including Tim Jennings of Mbantua Gallery, Jo Doyle of Ironwood Arts as well as nearly all of the dealers in Alice Springs at one time or another. From the outset her work was popular and, just as Emily had done during the early 1990’s, Minnie kept many galleries in business during the start of the new millennium. In the space of just seven years, like Emily, she could easily have painted up to 4000 works. With Torres as her agent she produced most of her finest paintings, receiving wide acclaim after solo exhibitions in Melbourne in 2000 at the Flinders Lane Gallery and in Sydney at Gallery Savah. Her works were exhibited at Fireworks Gallery in Brisbane, Japingka Gallery in Perth and Tandanya in Adelaide as well as being included in important exhibitions in Paris, and Santa Fe. She passed away in 2006, her life an extraordinary journey mapping the transition from that of a nomad, through the early years of the pastoral industry, to a new era of Aboriginal control, and a flourishing art movement at Utopia. It has only been possible to assess the true quality of her output in retrospect, because her career as a painter was rapid and chaotic and her output uneven and often repetitive. Since her death, it has become apparent that her finest works are enduring masterpieces and, despite her many minor works, these place her amongst the most important Aboriginal artists that practiced during the early years of the twenty first century.

McCulloch, Susan. 8 Nov 2003. All in the Family. Australia. The Australian.