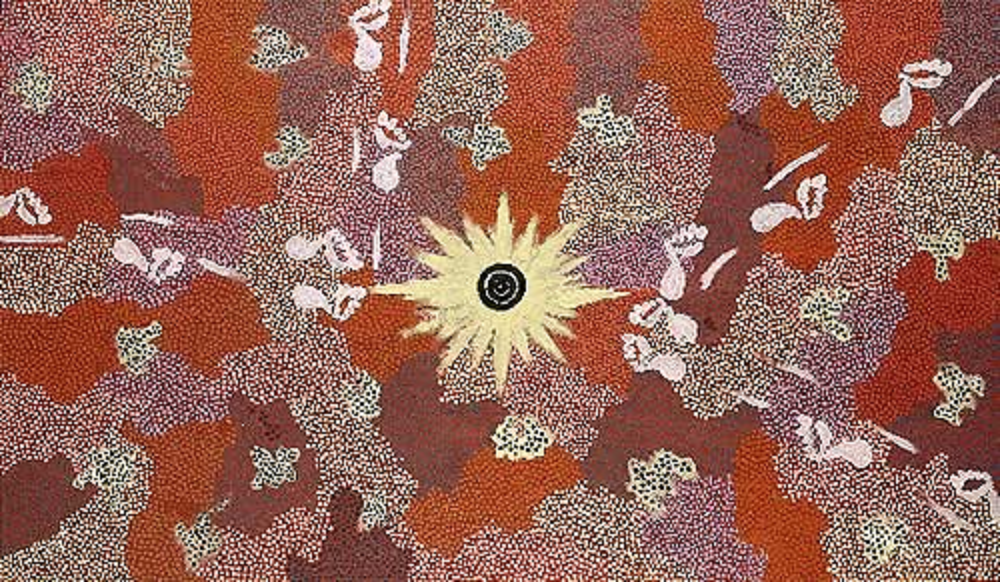 Mount Allan Station, 300 km from Alice Springs off the Tanami Desert Track, is an Aboriginal owned and operated cattle station. There is a community store (providing food and fuel for travellers and for the 250 people who live on Mount Allan) and a Primary school. Clifford did do several years of schooling here and was under the guidance of the “Christian Brothers” teachings and their methods.

The successful promotion of the art and culture of the Anmatjerre people provided a substantial source of revenue for the painters and the community as a whole. Whether the paintings are telling of a dreamtime act of creation, or of food-gathering or ceremonial events, they always relate to particular physical sites known to the artist, of immense importance to the bonding they feel for the rugged countryside of the Mount Allan (Warri Warri) district. Clifford, as a young man worked on this cattle station and eventually began his painting career there. The painting in question depicts a two dimensional aerial view of Mount Allan Station and its busy day to day workings, both within the town but primarily by its fauna and flora….the animal inhabitants which form such a crucial part of central Australian paint culture. Make no mistake, at the centre of this painting is Clifford’s spiritual place of being….his art. This is an important and significant painting indeed.

Clifford Possum Tjapaltjari’s career spanned more than 30 years during which he produced a large volume of work. The most prolific period was between 1983 to 2000, after he began working independently of Papunya Tula Artists. His highest prices at auction have been predominantly for early boards painted in the first two years of the Papunya movement and these account for six of his ten top prices. By 2006 two quite different works had sold at his record price which then stood at $411,750. Both were recorded at Sotheby’s in July 2005. Emu Corroboree Man 1972 (Lot 72), a board measuring just 46 x 61.5 cm, handsomely exceeded expectations of $150,000-250,000 but not as spectacularly and unexpectedly, as the large 184 x 457 cm canvas Man’s Love Story 1993-1994 which carried an estimate of a mere $50,000-70,000 (Lot 306). These estimates clearly reflected Sotheby’s belief that, given its rarity, the early board would be of greater value to serious collectors than the canvas painted more than 20 years later. Yet the monumental canvas, featuring many of the most innovative elements the artist had introduced in to his work over the previous 20 years amply demonstrated the power that many of his late career works engender. At the time, a number of Clifford Possum collectors, particularly those with large holdings created during the 1990s, were not prepared to offer them for sale due to their disgust at the market’s apparent disinterest in works produced after he left Papunya Tula. Emboldened by this particular sale, a number began to release paintings on to the market for the first time since the scandals surrounding the artist in the mid to late 1990s.

While the vast majority of these canvases lacked th meaning, and demonstrated the artist’s unique design sense and artistry. There was a dearth of material of high quality on the market during the years 2003 and 2004 resulting in rather disappointing results for the artist. However, his sales between 2005 and 2007 were nothing short of spectacular and as a result he was the fifth best performing Australian artist over the period. During 2005 two strong results were achieved for Clifford’s 1990s canvases. In June, Lawson~Menzies sold Warlakurlangu 1994 estimated at $80,000-100,000 and measuring 138 x 211 cm for $96,000 (Lot 94), the artist’s then ninth highest result. Six months later, Men’s Spider Initiation 1999, a work measuring 184 x 201 cm sold at the low estimate of $120,000 to become the artist’s seventh best record (Lot 114) at the time. Two years later the same painting was resold, once more by Lawson~Menzies, achieving $132,000, thereby giving it the artist’s sixth and eighth records. Offered once again through the same auction house in 2009 it established the artist’s tenth highest result at $102,000. Those reading this review are invited to speculate as to why the same painting would be offered and appear to sell successfully four times in as many years through the same auction house while on each successive offering the price paid actually decreased. I could not possibly do so without inviting litigation.

Regardless of any market shenanigans, Clifford Possum’s place in the annuls of Aboriginal art was reinforced in spades during 2007 when, following Lawson~Menzies record breaking sale of Emily Kngwarreye’s Earth’s Creation 1995 for $1,056,000 in May, Sotheby’s announced that they would be offering the monumental 1977 masterpiece Warlugulong at an estimate of $1,800,000-2,500,000, and published it on the wrap around cover of their July 2007 catalogue. The painting had a fascinating history and had been last sold by Joel’s in their April 1996 action with the title Legends of the Western Desert 1977 (Lot 109). In what is indicative of the rapid rise in interest and change in the dynamics of the Aboriginal art market during just one decade the 202 x 338.5 cm painting had been estimated at $3,000-5,000 in 1996 and sold for $39,600. It was purchased by Aboriginal Gallery of Dreamings owner Hank Ebes who, having exceeded the limit set by his U.S. client, decided to go on bidding for the masterpiece himself. The work had hung in a cafeteria for the previous decade, and for the following 11 years held pride of place amongst a treasure trove of important Indigenous paintings in Ebes Melbourne home. However with the closure of his successful Bourke Street gallery, Ebes released the work to Sotheby’s who sold it to the National Gallery of Australia for $2,400,000, a record for an Australian Aboriginal artwork that is likely to stand for many years in to the future.

Average prices and numbers of works offered at sale have almost doubled since his death in 2002. However they have risen from a rather low base average of just $10,000 through the 1990s and of the 504 paintings offered only 284 or 56% have sold. This confirms the unwillingness of owners to part with Clifford’s works cheaply given their belief that they have been prejudiced and undervalued in the market. Yet it is equally true that many contemporary collectors find Possum’s images problematic and are not drawn to his palette and general aesthetic. Although his works do not have the restricted colour and minimal imagery of a number of currently successful artists whose works better fit the contemporary aesthetic it is likely that, as fashions change, the lasting power and cultural content evident in the best of Clifford’s paintings will prove more satisfying to serious collectors. In addition, the market is generally unaware that there are a number of works created by the artist in the early 1990s that are every bit as good as the record holding 1977 Warlugulong painting. What’s more, they are painted in more splendid colours and are far more archivally sound. Both buyers and sellers need to be aware that, more importantly than is the case with any other single Aboriginal artist, paintings attributed to Clifford Possum must go through a very rigorous vetting process in order to establish their bone fides. So unwitting has been their entry into even the most prestigious collections that wrongly attributed works and outright fakes lie dormant waiting for their authenticity to be verified by those expert in his iconography, Dreamings, and painting style.

Due to the volume of works presented to auction houses and their strict selection criteria, as well as the affection in which the best works are held by their owners, very few come up for re-sale apart from those that failed to reach their estimates in previous sales. One such work, an accomplished and attractive Worm Dreaming measuring 128 x 180 cm, that had sold for just $6,600 at Phillips in 1998 (Lot 5) achieved a price of $30,000 when re-offered at Lawson~Menzies in May 2005 (Lot 77). Another, however, in muted russet tones featuring a figurative bird motif entitled Arinkarakaraka 1983 measuring 100.5 x 80.5 cm was bought for just $4,600 at Sotheby’s June 1995 (Lot 350) and five years later sold for exactly same amount in Sotheby’s June 2000 (Lot 305). Ngarlu (Love Story), 1993 has been offered through Lawson~Menzies in both 2005 and 2010 and sold both times for $30,000. Clifford Possum rarely worked on paper. Only three such works have appeared at auction. One painted in 1972 reached $57,500 at Sotheby’s in June 2000 (Lot 111) while another undated work sold for $22,000. Carved and painted objects are also rare and highly sought after at sale. Thirteen of the 16 objects presented have sold at an average price of $9,962. Overall, despite the low sale rate of Clifford Possums works, he remains one of the most enduring and important of Australian Aboriginal artists of all time. His artistic legacy is vast and uneven yet his best works represent extremely good value in the current market, a fact that is unlikely to continue as collectors become more knowledgeable about the history of the movement and his pre-eminent place in its genesis and development. The average price of his works has risen steadily throughout the last ten years, resting at $31,163 at the end of 2011.

Though his average in 2012 and 2013 was considerably lower at just a tad over $20,000 per work, and his success rate fell sharply, his total sales in 2012 was enough to secure him the position of the 5th most successful artist, and 2013, 11th, in what were shocking years for sales of Aboriginal art at auction. Provenance will always be an issue with works attributed to Clifford Possum, and buyers should take every precaution to ensure that paintings credited to him are in fact authentic and unassisted. Those collectors with works that turn out to have been assisted by others should reattribute them accordingly. They may still be highly desirable pieces and worthy of sale even though their value is likely to be diminished.