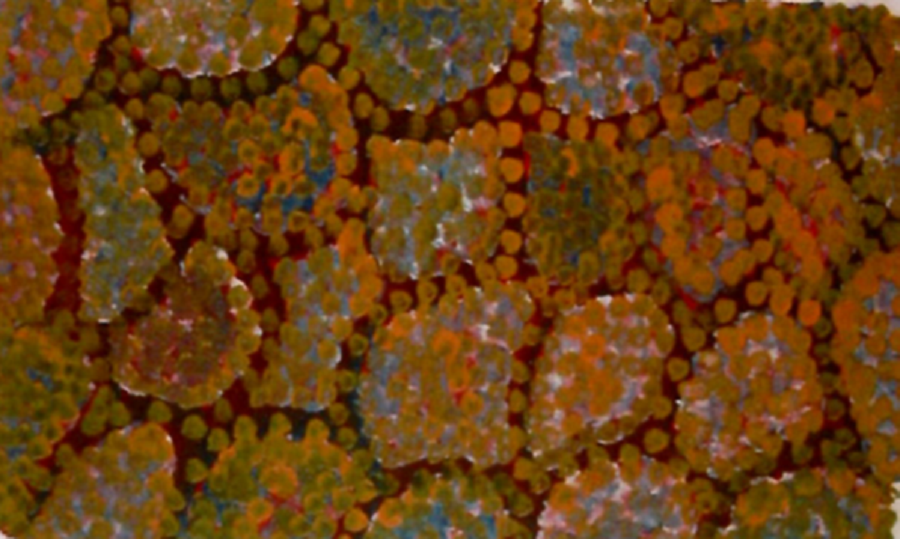 In the early 1990s Emily Kngwarreye became the first Indigenous artist in Australia to break the $10,000 ceiling paid for paintings in the primary market. Paintings measuring up to 120 x 180 cm in size sold regularly in galleries for between $10,000 and $20,000 while those around 90 x 120 cm sold for $8,000-10,000. Following her death in 1996 Emily’s prices surged, but stabilised during the late 1990’s while curators and critics reappraised her work. A great deal of dealer enmity continued to exist around her career and oeuvre following the spate of adverse publicity that had characterised many works as either failures, fakes, or ‘School of Emily’ paintings i.e. those created by other clanswomen. This resulted in a highly sensitised market in which a significant proportion of collectors were willing only to purchase works with a very restricted range of provenance.

Sotheby’s preference for works that were produced for CAAMA, and at Delmore Downs, for instance, prejudiced even the best of the paintings that came from other legitimate sources. At the time of her death they were the only auction house with specialist Aboriginal art sales. Although Deutscher~Menzies managed to establish what was the tenth highest price paid for one of her works by 2006, this stood as the only non-Delmore work sold in the top ten prices at that time, and one of only four which had sold amongst the 22 works which had achieved more than $100,000 at auction. Prior to 2004, Sotheby’s dominated sales of Kngwarreye’s work and, as would be expected, had offered them for sale at all of their Aboriginal art sales since their first specialist sale in 1994.

By 2006, 39% of the 346 works sold at auction had been offered through Sotheby’s compared to 22% by auction houses owned by the Menzies group, 11% by Shapiro/Philips and 8% by Bonhams and Goodman. In 2007 Lawson~Menzies more than doubled Kngwarreye’s previous record and, in doing so, set the new standard for a painting by any Indigenous artist, by replacing Rover Thomas’s All That Big Rain Coming Down Topside 1991 which had sold at Sotheby’s in 2001 for $778,750. The $1,056,000 paid for Earth’s Creation 1995 marked the first time an Indigenous Australian artwork had exceeded the $1 million dollar mark at a public sale. It still stands as the highest price ever paid for a work of art by any Australian female. The work, created in four panels measuring a total of 632 x 275 cm, had been estimated at $500,000-700,000 in Lawson~Menzies May 2007 sale (Lot 60).

It was purchased by Alice Springs art dealer Tim Jennings, who had enjoyed a long and fruitful relationship with the artist and many of her countrywomen. In that year no less than four works entered her top ten results. Deutscher~Menzies achieved $156,000 for My Country 1994 in their September sale (Lot 44), while sister company Lawson~Menzies followed this with Earth’s Creation II in November. Both were non-Delmore works, produced ‘en plein air’ for Dacou Gallery. Earths Creation II, was another major multi-panelled piece that had been painted during the same 1995 workshop as her record breaking work. It entered the records as her third highest sale when it sold for $336,000 against a presale estimate of $450,000-600,000 (Lot 60).

To end a very good year for the artist, Wild Anooralya, produced at Delmore Downs in 1992, entered her records at number six when sold for $210,000 at Sotheby’s in November (Lot 70).

The prices of her better paintings have consistently risen since 2000 with the exception of 2005 when a glut of works were offered for sale at auction. Average prices rose from around $20,000 in 1997 to over $34,712 by the end of 2007 and, on the back of her Tokyo retrospective, to $35,381 by the end of the following year. Yet, of the 936 individual paintings offered for sale through auction houses since her career began, the majority have been valued at between just $5,000 and $50,000.

This has been due to both the large number of smaller works that she produced, and the premium paid for relatively rare major works created early in her career. Only 57% of all works by Emily have sold when offered, despite major auction houses vetting the works heavily and dismissing any other than the best works carrying preferred provenance. The second highest price paid for a work by this artist was the $463,000 for Spring Celebration 1991, which measured 130 x 230 cm, and sold at Sotheby’s in 2003. This reflects the premium paid for major paintings from her early period, however, outstanding works from later periods always do well when offered for sale. The best example is Kame Colour 1995, a truly luminous late career work in the meandering linear yam style. Though just 90 x 150 cm in size, when offered at Lawson Menzies in 2006 it sold for $240,000, the artists’ sixth highest price at the time. Reputedly purchased by a consortium of collectors put together by Rod Menzies it was reoffered through Deutscher~Menzies in 2008, just as the market began to go soft and sold for $216,000. It currently holds Emily’s eleventh and twelfth highest records. Yet in what is a salutory tale, it was offered again in 2009 and sold for $159,000, and again in 2013 by which time its value had dropped to just $138,000. Why a painting of such quality would be sold publically 5 times over within 7 years and drop in value by 40% is a story that may never be fully revealed, such are the intrigues of the auction market. Sales of Emily’s works slumped immediately following her death.

While the primary market for her works exceeded $1,000,000 in 1996, her total secondary market sales were just $344,420. It reflected a ‘wait and see’ attitude, and an unwillingness amongst holders of important works to test the market. A premature release of works by nervous collectors in 1998 and caution during the following year, when Deutscher~Menzies held its first specialist auction, saw sales slump to just $382,640. This was, no doubt, due to a fierce publicity battle between the auction houses over provenance issues. Sales grew steadily thereafter and peaked in 2004 with total sales at auction reaching $2,072,538 due to Christies, Lawson Menzies, Shapiro and Bonhams and Goodman all joining Sotheby’s with specialist auctions. However this figure almost halved in each of the following two years as all but Lawson~Menzies abandoned the field. With the sale of four works achieving top ten status, 2007 proved to be Emily Kngwarreye’s best year ever with total sales almost tripling each of the previous two years despite a clearance rate of just 50%. 2008 may have seen the number of works on offer drop from 69 to 46 but her clearance rate for the year jumped to 72%, due to the enormous amount of publicity generated by her international retrospective. 2009 saw her clearance rate return to 66% a good 10% above her career average. Earth’s Creation II painted in 1995, holds her third, fourth and seventh highest results. When originally offered in 2007 through Lawson~Menzies the work sold for $336,000 then a year later it sold through Deutscher~Menzies for $360,000.

In 2011 this same work was re-offered through Menzies and sold for only $226,727. A rare loss for one of Rod Menzie’s ‘notorious’ buyer groups. Throughout 2012 and 2013, despite a very soft market, Emily’s sales remained execptionally strong. She was once again the most successful artist each year recording more than $1 million in sales in 2012 and a staggering $2.5 million in 2013 when her clearance rate was a very healthy 69% and average prices exceeded $70,000. In 2012, Emily’s exceptional work Summer Rains on Alalgura 1991 sold at Mossgreen’s Ross and Rona Jones sale recording her eighth highest result. This fell to ninth in 2013 after a very early work Alhalkere 1989 sold in Bonham’s Grundy sale for her fifth highest record of $305,000. Another 1989 work squeezed into Emily’s top ten during 2013 making this an excellent year for the artist whose AIAM rating was more than double that of her nearest rival. It is now over fifteen years since the artist’s death and enough time has elapsed for the story of her career and those who worked with her to have been thoroughly examined. There is no doubt that Emily Kngwarreye painted wonderful works for a variety of dealers. Most importantly works produced for Fred Torres with Dacou Gallery provenance and those produced for Christopher Hodges of Utopia art in Sydney have been greatly undervalued in the market. The best of these works would seem to represent fantastic value, as would good paintings from a number of additional sources. Overall the market for high quality works by the artist remains strong despite the emergence of equally gestural painters from the Eastern and far Western deserts, whose works sell at much lower prices. While early works will always fetch a premium over paintings of similar size from other periods, exceptional late career works are yet to be tested.

These include the final series of 22 paintings completed immediately prior to her death. When these are finally released on to the market they will create a sensation. Since Emily emerged as a major force in contemporary Aboriginal painting in the late 1980’s, her international recognition and renown has shown no sign of abating. Her inclusion in the Venice Biennale and her retrospective exhibition have reinforced this since her death. Her reputation was further advanced during 2008 with the landmark exhibition curated by Margo Neale of the National Museum of Australia which toured Osaka and Tokyo. The importance of this can not be overstated. It presented Emily Kngwarreye as one of the greatest international contemporary artists of the twentieth century. This alone should ensure that the value of Emily’s best works continue to be highly prized by Australian and international collectors and fetch premium prices far in to the future.