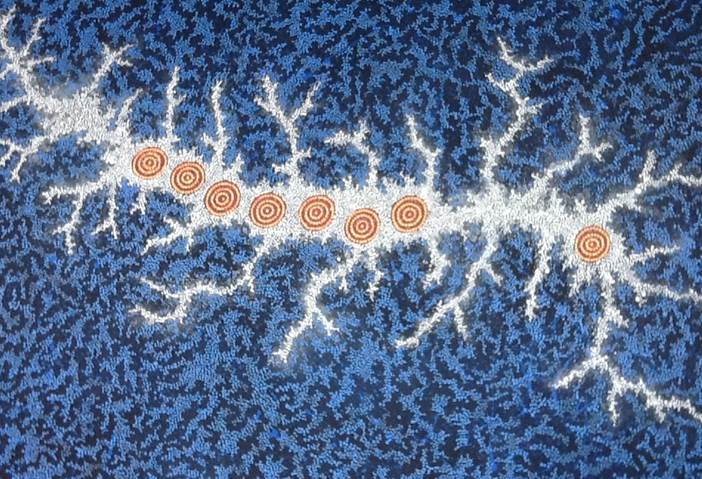 Gabriella Possum Nungurrayi, the daughter of one of Aboriginal art’s most successful artists of all time, Clifford Possum Tjapaltjarri, has been propelled from 114th to 59th rank during the past 7 years, due almost entirely to her European sales. Amongst these, six of her top ten, including her record, were recorded by Parisian house ArtCurial. These auctions, and er inclusion in the exhibition of major works at the Ludwig Museum in Cologne, confirm the continued interest of European collectors in her work. The ongoing importance of the Aboriginal components of the Musée du quai Branly and significant representation at galleries coinciding with major art events such as Art Basel cannot be overstated.

In July 2008 Melbourne dealer Peter Los organised a sale of Australian Aboriginal art at the Hôtel Dassault in Paris through the French auction house, ArtCurial. In a sale that had mixed results, Gabriella Possum’s Bush Tucker Dreaming: My Father’s Country was one of the star lots when sold for 22,980 € (then equivalent to $37,496). It is incredible that until that time, every one of her eight highest results had been achieved by Elder Fine Art in Adelaide, with not a single sale recorded to any of the major players with stand alone Aboriginal art auctions.

It would be interesting to speculate why it is that no Tier I auction house has sold more than three works and Sotheby’s have sold only one – especially interesting as Gabriella Possum’s results at auction are impressive and her lineage ‘royal’. Between 2005 and 2007 no less than 37 works were offered of which 31 sold for a clearance rate of 84%. Given a career success rate of a still relatively healthy 65% it is clear that the appreciation of, and demand for, her work has increased rapidly since the beginning of the new millennium. Her results would be all the more impressive were it not for the appearance at sale of prints and graphics of which only nine have sold of 26 offered for an average price of just $353. The sale in Paris, that set her career high of $37,496, corresponded to a period of serious ill health. However, she now continues to create works of great beauty, albeit not as fine as those created during the previous decade.

Foremost amongst a number of absolute bargains sold at auction were the exceptional 122 x 241 cm rendition of Seven Sisters Dreaming estimated at a giveaway $2,500-3,500 and sold for $4,810 at Leonard Joel Melbourne in October 2005 (Lot 220) and the very unusual combined work featuring both Seven Sisters Dreaming and Bush Tucker Dreaming that sold for just $3,421 when estimated at a throw away $1,200-1,500 in the same sale (Lot 9).

Re-sales are hard to detect given the number of works with similar titles, however there have been some notable failures, generally recorded due to over ambitious estimates. Lawson~Menzies obviously felt they had a very special and most unusual Seven Sisters image that seemed to have been rendered in an experimental technique using a palette knife. Estimated at $18,000-20,000, the highest ever sought for a work by this artist, Lawson~Menzies failed to attract a buyer at their May 2007 sale (Lot 14). They had no better luck with the magnificent 94 x 186 cm Seven Sister’s Dreaming 2000, which they estimated at $10,000-12,000 in their November 2007 sale (Lot 258). In 2016 there were 15 works offered for sale of which 8 sold. The highest price recorded that year was just $4,600. Of the 8 offered in 2017 only 3 sold, for an average price of $3,372.

With the narrow range of provenance currently accepted by Sotheby’s, Deutcher and Hackett, and Mossgreen it is unlikely that an artist, even of Gabriella Possum’s lineage and talent who has worked independently and eschewed exclusive contracts with any one gallery, will get a guernsey in spite of the fact that her images are much loved, as evidenced by the fact that they have appeared on the side of trams in Melbourne and several other public commissions. As a result, collectors keen on her works should be able to pick up bargains for the foreseeable future. She is a seriously talented painter, even if her Bush Tucker works seem slightly kitsch or generic to those in thrall of the optical and minimal. Her cosmic paintings are worth far far more than the market currently demands, but buyers should be quick. They are unlikely to remain so inexpensive once her production slows.