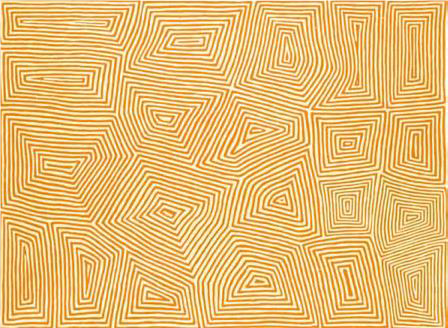 George Tjunurrayi’s works first appeared at auction in 1995, the year that Yatintjanga 1978 (painted just two years after he took up the brush) was offered for sale. The 125 x 162 cm canvas was a fine example of Pintupi Tingari paintings of the period, featuring interconnected sites in very pleasing earth tones. It was estimated at $10,000-15,000 and sold at Sotheby’s for just $11,500 (Lot 615) . This is still the highest price ever achieved for an early career work and currently the 22nd highest result his paintings have achieved at auction.

Very few major paintings failed to sell until 2008, a year which saw only six of the 22 works offered find new homes, thereby dropping his career success rate dramatically from 63% to 54%. Yet 2008 also saw two works enter his top ten at second and eighth position. His then record price had been achieved the previous year for a work depicting the claypan site of Mamultjulkulnga near Lake McKay created in 2001. The large Papunya Tula provenanced piece, in which the finest of line work was meticulously layered to achieve the final glowing terracotta tones, justified its $50,000-70,000 estimate by achieving the midpoint at Sotheby’s November sale (Lot 57). In 2009 Deutscher and Hackett justified an even higher estimate of $70,000-90,000 by setting a new record for the sale of Untitled 2001 for $72,000. The large work, measuring 182 x 244 cm, fitted the style and pattern of previous record setters bearing the Papunya Tula stamp of provenance. Despite these stellar sales, mimicking 2008, the following years have brought mixed results, and seen the artist’s career clearance rate drop to only 52%. 2012 was a good example, with only 1 of 5 works on offer selling. It went for $10,200.

While few resales of George Tjunurrayi’s works have appeared at auction and only six major works have failed to sell, his clearance rate has been adversely affected by the large number of minor paintings that have been offered. Collectors should be aware that the six major works that failed to sell all carried excellent provenance and very reasonable presale estimates. Moreover one work that did resell at Menzies in 2010, Bush Potato Dreaming Putulnga 2000, did so for $6,000, less than its original $28,700 at Sotheby’s in 2005.  There is no doubt that the works created by George Tjungurrayi for Papunya Tula are favoured in the secondary market with these occupying eight of his top ten and 14 of his top 20 results. However, this may simply reflect the relative numbers of works he has created for the company compared to those he has painted for independent dealers.

By far the largest paintings that have been offered for sale at auction were created for independent dealer Peter Van Groessen and these were originally offered in the primary market through Kimberley Art Gallery in Melbourne. Yam Dreaming and My Father’s Country were both created in 1999 and measured approximately 180 x 350 cm. When offered through Lawson~Menzies in June 2007 and May 2006 they sold for $43,200 and $32,400 to make the artist’s current fourth and seventh highest results.

George Tjungurrayi only began painting in 1976, therefore it is not surprising that no works on board have appeared However, it does seem unusual that hardly any 1980s paintings have been offered. The highest price paid for one of these was for an unremarkable stiff and formulaic work entitled Wirrulnya 1988. Offered at Sotheby’s in November 2007 the 182 x 121 cm painting carried an estimate of just $7,000-10,000 and, even with a Papunya Tula provenance, sold for just  $8,400.

Overall, despite a dramatic fall in his clearance rate since 2008, works by George Tjungurrayi created after the mid 1990s would appear to be set to continue their rise in value. With a relatively low record price of $72,000 and only seven works having sold for more than $30,000 it would seem like a propitious time for collectors to look at his work more seriously. Other seminal artists who took Pintupi men’s art into its new paradigm in the later part of their career, including Turkey Tolson and Mick Namarari, have record prices of  $180,000, $210,000 respectively for works created in the mid 1990s. George is still alive and actively working, and hopefully he has many productive years ahead of him. Because of this I would expect his prices in the primary market to exceed those for all but the very finest that appear at auction for some time into the foreseeable future. This should create a good opportunity for those collectors, who may not be able to accommodate the largest of his works, to pick up something good at a far more reasonable price at auction than they would pay at one of the galleries, which are contractually tied to Papunya Tula. If Tjungurrayi continues to intermittently paint outside of the company there may be many fine works that buyers, who care less about provenance as a political issue, may be able to purchase for less than the premium that Papunya Tula works attract.