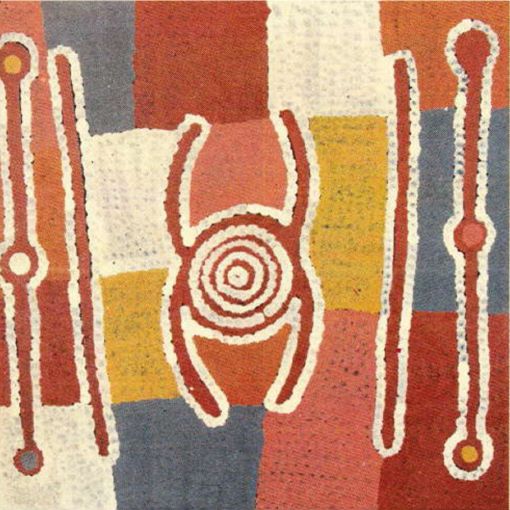 Travels of the Spider Ancestors 1991

Water Dreaming with Rainbows and Rain, 1972

Few artist’s record prices have lasted as long, Yet Billy Stockman’s next highest result is only $36,000. This was achieved for a 1991 work entitled Travels of the Spider Ancestors which was sold by Lawson~Menzies in June 2008, Lot 262. It was a good result for a late career work by one of the early Papunya artists and justified the confidence Lawson~Menzies specialists had in it, evidenced by the presale estimate of $35,000-45,000.

Brave of them, as all of the artists top ten results at the time were for 1971-1973 boards and apart from this spectacular exception nothing painted after 1978 had appeared in the artists 15 highest results or has generated more than $8,000 for its seller. This very prolific artist, who created work for more than 30 years has had no less than 291 works offered for sale since his first paintings appeared at auction in 1988. Yet his career average price is just $5,252 despite a respectable clearance rate of 59%. While 1998 was by far his best year at sale with 16 of 17 works sold including his record price, 2005 was also a good year with 17 of 19 painting selling. This however was the last time Billy Stockman’s fortunes were on the ascendant. Since then only 46 of the 95 works on offer have found buyers. Only 13 paintings in total have sold for more than $10,000 and it is his low average price that has prevented Billy Stockman from attaining a higher place in the annuls of Aboriginal art.

When, in 2005 Sotheby’s offered a rare sculpture of a Carpet Snake carved by the artist in 1972 it created quite a sensation. Estimated at just $1,000-1,500 (Lot 269) this rather spectacular object measuring just 69 cm in length sold for $22,800. It is by far and away his best result for a work in any medium other than painting. Sotheby’s have in fact made up most of the running on Billy Stockman’s works with their closest competition coming from Lawson~Menzies.

Yet no less than 17 auction houses are recorded as having sold his works over the years making him one of the most durable and recognised artists amongst collectors. Amongst his most notable failures at sale have been the large work Totemic Snakes 1985 that had been purchased from Deutscher~Menzies in June 1999 (Lot 17) for $8,050 when estimated at $8,000-10,000. Offered again at Lawson~Menzies in May 2007 (Lot 120) it simply could not justify its presale estimate of $18,000-22,000. Another failure was the beautifully rendered and extremely attractive board entitled Kangaroo Dreaming, Papunya which should have fully justified Mossgreen’s confidence in placing a presale estimate of $20,000-22,000 (Lot 190) but was passed in at their August 2008 sale. Further reinforcing the price sensitivity of Billy Stockman’s works, Frog Corroborree, a nice large early 1973 board, failed to sell at Deutscher~Menzies in June 2000 (Lot 144) when offered at $25,000-35,000 but sold at Sotheby’s in 2002 (Lot 335) for just $8,400 with a lowered expectation of $7,000-10,000.

On a more positive note, a board entitled Women’s Bush Tucker Story 1972 measuring 61 x 69 cm and bearing a Stuart Art Centre code number from the 11th consignment originally failed to sell when offered at Lawson~Menzies in May 2004 carrying an estimate of $35,000-50,000 yet sold for $30,000 at the same auction house three years later. This is the artist’s fifth highest record at sale to date. It would seem that, for the time being at least, those interested in works by the most seminal artists of the movement should be able to include Billy Stockman in their collections for what will come to be considered a bargain price. His early boards are wonderful buying at anything under $30,000 and there are any number of 1980s and 1990s paintings to be had for a song. Billy died in September 2015 after a long and fruitful life. It is unfortunate but likely that when collectors become aware that he has passed away they will begin to reassess this wonderful old man’s legacy.