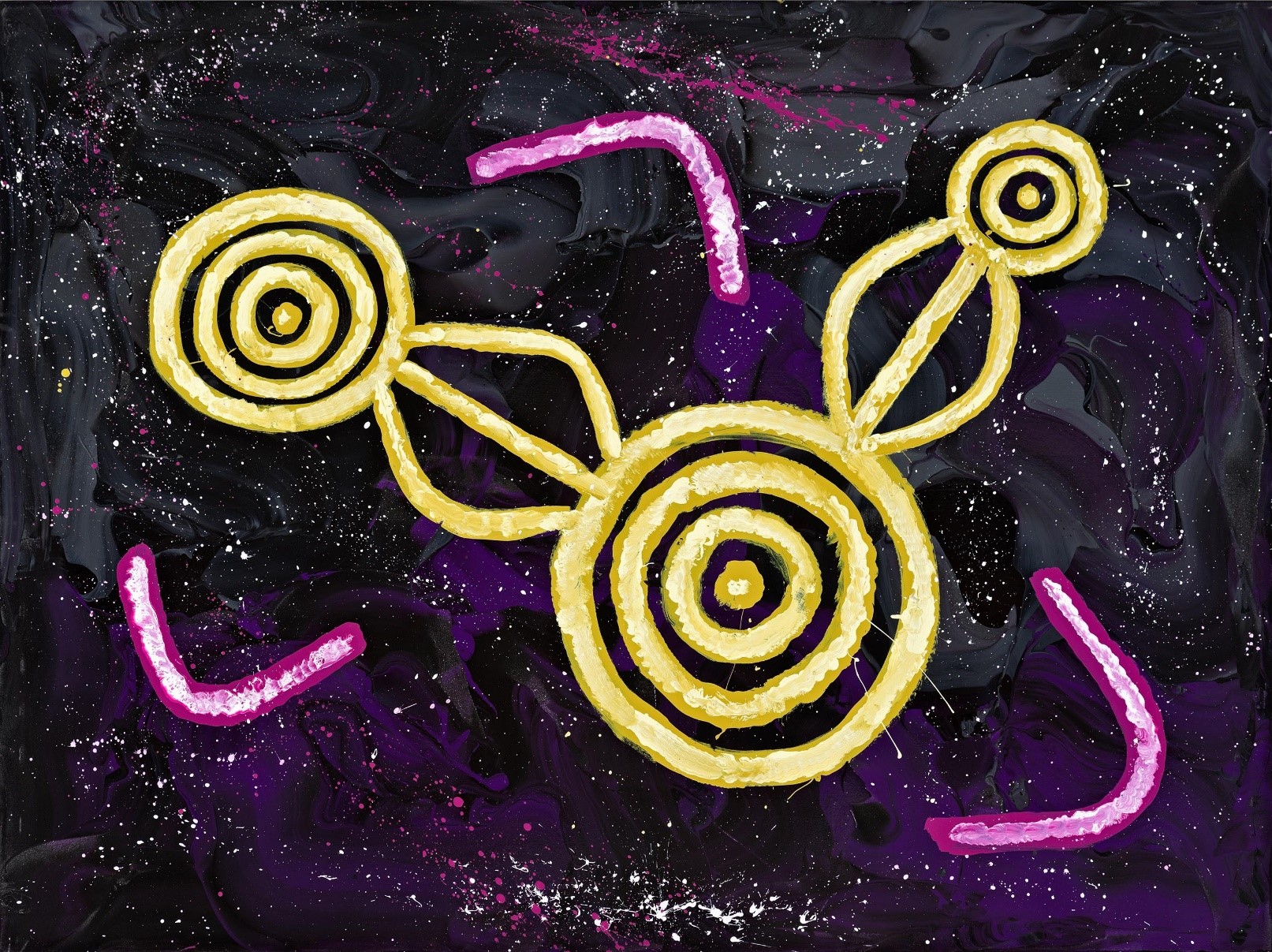 Winner of the 1st (Inaugural) Aboriginal and

For an artist of such eminence Michael Nelson Tjakamarra’s secondary market results are nothing short of lackluster. With major works in the Sydney Opera House and the forecourt of Parliament House in Canberra and having been the winner of the inaugural National Aboriginal Art Award, his highest price at auction is just $16,800. Sotheby’s set this record in 2004 for a Papunya Tula work created in 1984, the year after he began painting. Nothing could illustrate more clearly the deep unjustified prejudice against works painted outside of Papunya Tula than the fate of works by Michael Nelson who, since the late 1980’s, has preferred to operate independently. His second highest result is a very large Papunya Tula work measuring 244 x 244 cm which sold in the same Sotheby’s sale, held in July 2004 as his record priced work. These were lots 264 and 265 and both carried estimates of $12,000-18,000. Until that time Michael Nelson’s record had stood for a staggering sixteen years at the $12,000 that was established in 1988, more than six years prior to any specialist Aboriginal art sales being held in Australia. While none of the remaining seven works in the artist’s top ten had come from Papunya Tula until an untitled 1987 work sold for $13,420 at Joel’s in 2008, the remainder range in price from just $3,960 to $8,625. Of these one work has sold twice. A beautifully executed image entitled Five Dreamings was first offered by Lawson~Menzies in May 2005 dated 1975 and sold at its low estimate of $6,000 (Lot 168). Having been purchased by a collector with a very focused collection of 1970’s Central and Western Desert paintings, he was very disappointed to learn that it had been created a decade later in 1985.

The collector requested it be reoffered in their November 2006 sale where it sold once more at the low estimate of $6,000 (Lot 327). Two works offered as early as 1994 at Lawson’s both sold for $3,960 despite carrying different estimates. Kangaroo Dreaming at Warnluneveru measuring 167 x 88 cm had been valued at $4,000-7,000 (Lot 14), while a larger work Rock Wallaby and Possum Dreaming carried an estimate of just $3,500-6,000 (Lot 220). Amongst the large number that have failed to sell seven have carried estimates of between $5,000-8,000, eight between $6,000-10,000, two between $8,000-12,000, with one estimated at $12,000-15,000 and one at $15,000-20,000. This does not make pretty reading. As would be expected during a year in which his two highest results were achieved, 2004 was the artist’s most successful year with four works sold of five offered and total sales of $34,762. Yet 1988 is still recorded as his second best year at auction. That this occurred 20 years ago is absolutely remarkable for an artist of such prominence who is so strong in the literature. The pleasing auction result of $14,139 for Yam and Kangaroo Dreaming 1987 at ArtCurial auction in Paris during 2009, though his third highest record, was not great enough to reverse the general trend. While his late career experimental gestural paintings may have reinvigorated his career in the primary market and won him the prestigious Tattersall’s Landscape Prize in 2006, there is no evidence whatsoever of interest in these works in at auction. The most impressive of these, a large three panel work offered in Lawson~Menzies May 2005 sale (Lot 211) with an estimate of $15,000-20,000 failed to garner interest and was passed in. This will surely not last and yet two works offered in 2010 in this style failed to garner interest despite a lower estimate on one of just $5,000. Michael Nelson is a highly respected and greatly admired artist who has proved to be a comfortable negotiator on the interface between different art traditions and cultures. During his prolific career he has produced a great number of complex works of quality as well as many exciting, more contemporary, images. Yet since his works first appeared at auction his average price stands at just $2,996 and his success rate has been only 46%. Given these statistics, his paintings surely represent one of the most under appreciated caches of art by any single artist in the annuls of Aboriginal art. With important works in almost every single state museum and art gallery and his inclusion in so many important landmark exhibitions, a reassessment of this important artist’s work by the secondary market is well and truly overdue.