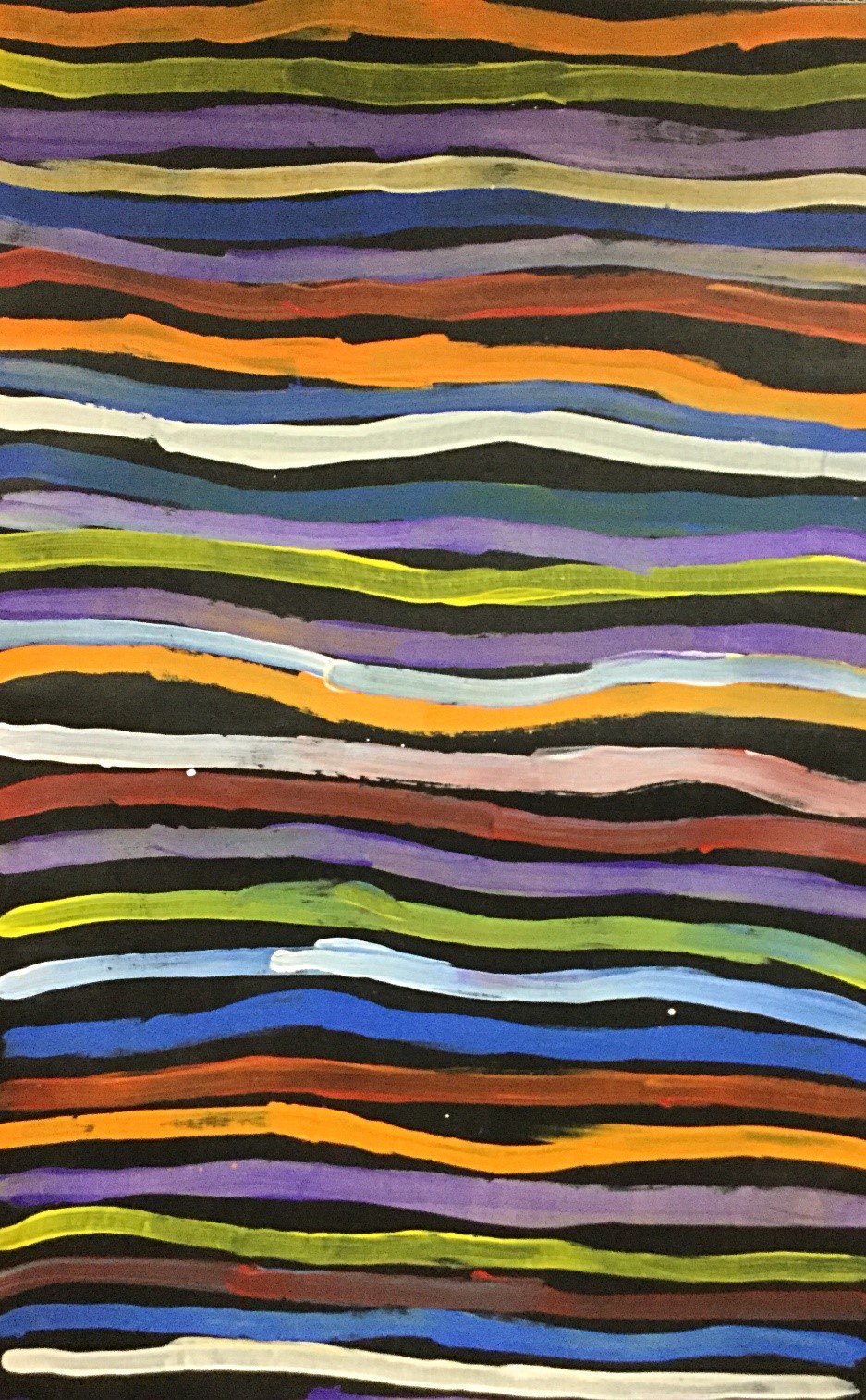 Top 10 Artworks for this Artist sold at Auction for:

Minnie Pwerle painted only during the last seven years of her life yet her output was prodigious. Her colourful expressive works seemed tailor-made to meet the market demand for vibrant gestural paintings left vacant by the death of her countrywoman Emily Kngwarreye. She created her earliest paintings in 1999 and by 2002, when her first works began appearing on the secondary market, they could be found in shops, retailers and galleries all over the country. With so many paintings produced in such a short and intense period, an uneven output and reports of fakery were not uncommon. While the Aboriginal art market was in a buoyant state, the speculative atmosphere at the time made it difficult for anyone, other than those closest to her, to differentiate between her finest works and the large amount of repetitive imagery she produced. As a result, when her paintings began to appear at auction, results were nothing short of catastrophic. Collectors, quite obviously, did not take her work seriously. Sotheby’s were completely disinterested in her, due in part to their lack of faith in the artist, but more because of their prejudice against works with Dacou provenance; a hangover from their policy in regard to Emily’s Kngwarreye’s output. Lawson~Menzies took up all of the running on the artist and to date the group of companies owned by Menzies has sold 96 compared to Bonham and Goodman’s 29, Elder Fine Art’s 24 and Leonard Joel’s 54. This compares to just 11 by Sotheby’s, 9 by Deutscher and Hackett and 3 by Bonham’s. Her total sales at auction stands at $2,003,662 with the Menzies Group (Lawson~Menzies, Lawsons and Menzies) comprising more than 60%.

Her presence in the secondary market began inauspiciously. When her works first appeared in 2002 only two works sold out of the five offered with two out of four selling the following year. With Minnie continuing to supply an ever ready and uneducated primary market, 2004 and 2005 were her worst years. Of 35 works offered during those two years 32 failed to sell. Under normal circumstances most auction houses and collectors would have seen this as the kiss of death., but there were a number of fine art galleries that had sold exceptional works by the artist. Believing that she had been ill-served by the mediocre paintings that had found their way in to the secondary market at that time they began feeding it with higher quality works through Lawson~Menzies sales. Perhaps one work alone pointed to a far different future for the artist in the secondary market. Despite the appalling results of 2004, an exceptional example of the artist’s best early paintings Awelye Atnwengerrp 2000, measuring 360 x 166 cm, sold for $43,200 against a presale estimate of $40,000-60,000 at Lawson~Menzies November auction (Lot 42). This result easily held the record for the artist until the following year when Lawson~Menzies sold Awelye 2004 for $72,000 (Lot 53).

It is indicative of the incredible turnaround in Minnie’s records that just four years later, this work was her seventh highest result. Sales during the three years following her death in 2006, by comparison, were nothing short of spectacular and were due entirely to a curatorial reassessment of her oeuvre by Lawson~Menzies who had sold every one of her top ten results and all but three of her top 20 by the end of that period. In what was a complete turnabout 55 works were offered in 2006 and 2007 of which 43 were successful. In 2007 alone, Lawson~Menzies posted the artist’s best, third, fourth, fifth, eight, ninth and tenth highest results. A new record was set in November 2007 for a relatively early work Awelye Atnwengerrp 2002 (Lot 51) measuring 165 x 360 cm, which sold for $78,000 against a pre-sale estimate of $60,000-80,000 thereby eclipsing the previous record of $72,000 for the similar sized Awelye 2004 that had sold in November 2006 (Lot  53). In May 2007 Lawson Menzies sold Awelye Atnwengerrp 2005 a work consisting of four 122.5 x 90.5 cm panels for $50,400 (Lot 96) to a Rod Menzies’ consortium rather than see it pass in, and when they put the work up again just 12 months later Menzies managed to offload his equity in the work when it sold for $54,000.

As would be expected, average prices on the secondary market vary according to size regardless of quality. Minnie painted a number of major works around 350 x 165 cm in size, which have sold at an average of $56,000. This held true in 2009 with Awelye Antwengerrp – Bush Tomato, 2001 measuring 353 x 164 cm which sold for $43,200. However there is a dramatic drop in average prices with works around 270 x 120 cm having sold for a mean of $18,000, while works averaging 200 x 120 cm sold at around $11,000. Works smaller than 150 x 120 cm regularly sell below $5,000. Moreover, regardless of size, her 2010 average price of $8.080, was nearly half that of 2009. This is quite a different story to her prices in the primary market. Since her death Dacou re-priced all of her canvasses painted prior to 2002 and today these sell for considerably more than the averages listed above. Over the next few years expect some spectacular results when the best of these smaller works are offered through auction houses. As a perfect example, Awelye 2003, a wonderful 120 x 90 cm work executed in a moody blue and white palette with minimalist aesthetic was estimated at just $8,000-10,000 in Lawson~Menzies November 2007 sale (Lot 110) but sold for $36,000, a stunning result compared to the average for works around this size of just $3,500. This prophecy, however, is yet to be fully realised. Minnie’s prolific output was never more evident than during 2010 when 30 works were on offer.  Only half sold and not a single work achieved $25,000 or more. With so many ordinary paintings sitting on collector’s walls, the cream of Minnie’s  oeuvre will only appear for sale over time. Nevertheless, her recent records have been impressive. She was the 20th most successful artist of the movement in 2015 and the 16th in 2016.

As with works by all prolific artists, the majority of Minnie Pwerle’s paintings are difficult to critically assess. Most of her smaller works are to be avoided at auction despite their appeal, especially by collectors who have any concerns about investment value. Yet those works bought with judgment and a critical eye should hold their value. With average prices for smaller works well below primary market values, the secondary market may well be the place to pick up a bargain, especially if you fall in love with a painting and are not so concerned about its re-sale value. Minnie’s major works vary in quality but not as greatly as the smaller pieces. There are enough masterpieces amongst them to ensure that Minnie Pwerle will rate amongst the greatest of all Aboriginal women painters and prove a number of her critics completely wrong about her legacy.