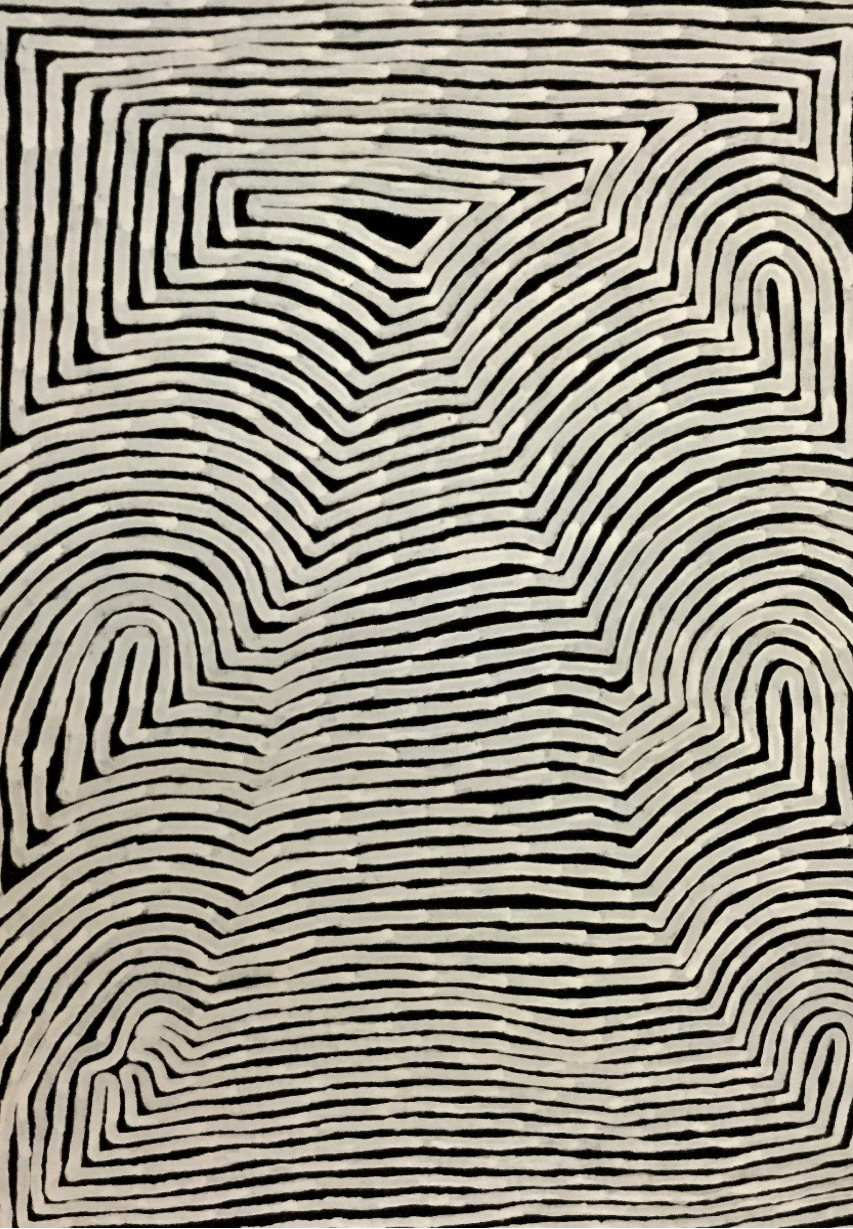 Ronnie Tjampitjinpa began to paint early in life and outlived most of his older contemporaries. He has enjoyed a long and fruitful career as a painter during which he has produced works in a variety of different styles. Apart from a small number of early boards from the early 1970s and generic Tingari paintings typical of the late 1970s and early 1980s, his distinctive trademark is bold geometric design. At their best these works, produced in the second half of his career, have a strength and power that commands attention while his lesser works seem stilted and repetitious by comparison. Although he painted before Bardon left Papunya, his best results have been for works created during the 1990s. This is quite the reverse of the other ‘Bardon’ artists. His early works are rare and do not share the visual strength of the early boards by many of the older men. While Ronnie has painted only occasionally for Papunya Tula since the mid to late 1990s it has been works with this provenance which have dominated his highest secondary market results. His top twenty sales have been for predominantly large works painted for private dealers and it is expected that major pieces like these will continue to increase in value, while his many minor works will languish.

Ronnie’s offerings at auction have been voluminous with 460 works offered for sale since they first appeared in 1995, and his clearance rate under 50%. THis is due principally to his independence as an artist in a market where provenance was formerly considered so important, the value of his paintings have been related to several factors other than size.

Two Boys at Wilkinkarra (Lake Mackay)1992, a painting with Papunya Tula provenance, although only 152 x 122 cm in size, sold for $79,812 (after being illustrated on the back cover of the catalogue for Sotheby’s June 2002 auction (Lot 40) and used extensively in pre-auction publicity). Then Two Boys at Wilkinkarra fetched a disappointing $43,200 upon its resale in 2011 at Sotheby’s May Auction in Melbourne (Lot 18). Prior to 2010 his next best recorded price is the $63,000 paid for a 183 x 153 cm Papunya Tula work on linen painted in 1993. This work titled Wilkinkarra more than doubled its highest estimate when sold in Sotheby’s June 2000 auction (Lot 119). At the time of the sale, segments of this extremely striking work were reproduced on a grand scale as hoardings surrounding the latest Renzo Piano development, Aurora Place, in Sydney. This was eclipsed in the Menzies March 2010 sale, with the third appearance of Kumpuralgna 1996 at auction since 2006.

Of his top ten results at the end of 2006 only one had come from a source other than Papunya Tula, however by the end of 2009 results for non-art centre provenanced works had increased to four. The word results is underlined here as 4 of these results have been set for one single painting! [the following scenario is supposition on my part. I have no proof whatsoever of its veracity] But Kumpuralgna 1996 has appeared in four Menzies sales over a period of 9 years. This 364 x 153 cm work was commissioned by Kimberley Art in Melbourne from dealer Peter Van Groessen and featured a number of the artist’s most important themes. It was purchased first in November 2006 for $54,000 (Lot 109) by a Rod Menzies buyers’ consortium of which Menzies most probably retained 50% of the ownership. When resold in March 2008 it was reputed to have sold for just $60,000. Now Menzies probably owned 25%! It appeared once more in 2010 and was recorded has having sold for $66,000 and Menzies had most likely now divested himself of the work. Finally five years later, in 2105, it recorded the artist’s second highest record price when it sold for $79,773 netting the syndicate Menzies cobbled together a modest profit on their ‘investment’.

In 2013 one of Ronnie’s early boards, Ceremonial Dreaming 1972, displaced another 1972 board as his highest record for an early work which had stood since 1996. In what has been a rare occurrence, a not dissimilar work almost twice the size was offered for sale by Lawson~Menzies in May 2007. Carrying an ambitious presale estimate of $75,000-95,000 Ceremonial Dreaming 1972 had failed to find a buyer until a week after the auction when reportedly sold by private treaty for $50,000.

In 2017 his previous record was shattered when Wilkinkarra (Lake Mackey) fetched almost double the record of $79,812 it had replaced. Sotheby’s had last sold the work in 2000 for $63,000 which was the record at the time. In 2017, after having enjoyed the work for over 15 years, the collector released the work to auction, making an extremely healthy profit.

While Ronnie Tjampitjinpa may be seen as a highly successful artist in the primary market with works in shops, galleries and on internet sites, only a handful of sales have exceeded $50,000 at auction, with over 20 selling for more than $25,000. His output was prodigious until 2012-2013 when his health began to deteriorate and he found it harder to paint with small brushes. Collectors would be well advised to take care when looking to purchase one of Ronnie’s works. Evidence suggests that while his works are still available in the primary market, all but the very best will languish at auction. Ronnie however is a most important figure in the history of Western Desert painting. His works will continue to demand interest well into the forseable future.