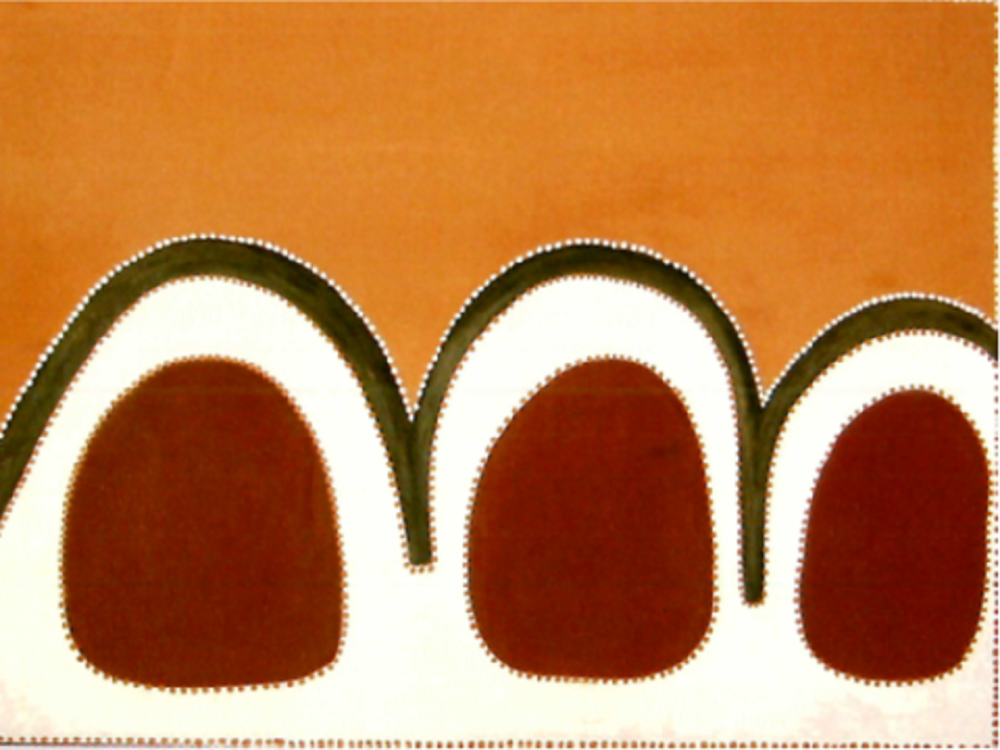 Provenance: A Major work in and Part of the “Canning Stock Route” Travelling Exhibition (Selected Australian Cities and Selected Cities Worldwide as part of a four year Tour)

All That Big Rain Coming from the Top Side 1991

After his inclusion in the 1990 Venice Biennale and his solo exhibition at the National Gallery of Victoria in 1994 Rover’s work was in such demand that his pieces were hard to procure in the primary market. He was perceived as a world-class contemporary painter whose art was highly collectable, yet few galleries could gain access to his work. In 1994 there was no art centre where he lived and paintings were produced for Waringarri Arts only on those occasions when he visited Kununurra, or the art coordinator, Joel Smoker, managed to travel down to the community. Many independent dealers spent time at the pensioner unit in Turkey Creek watching him paint works that they commissioned and it was inevitable that one or more of them would arrange for the artist to travel to an environment where he could produce a body of work large enough to meet the burgeoning demand. From this time in his career, Kimberley Art in Melbourne became a major supplier of his works in the primary market.

Although the first Rover Thomas painting appeared at auction in 1995, by 1997 no less than ten works had been offered of which nine sold at an average price of $18,000. In that year his highest price achieved was $68,500 and while his prices at auction were well above primary market expectations for his equivalent works, or those of any other artist, his record price, set in 2001, is more than ten times higher and his current average price and three times that of 1997.

In 1998, the year Rover passed away, his record price exceeded $100,000 for the first time when in August Texas Downs Station sold for $108,100 at Deutscher~Menzies. The following year two more paintings exceeded $100,000. On the back of these sales his average sale price doubled to $36,500 between 1997 and 1999. Almost twice the number of works were offered during 2000 with Deutscher-Menzies alone including no less than 19 pieces by Rover Thomas in its first stand-alone Aboriginal art sale in June.

It was all but inevitable that the sale rate would be affected and unfortunately for Rover’s records, seven of these works failed to sell. Other auction houses were equally unsuccessful that year apart from Sotheby’s, which discriminated against more contemporary pieces in favour of his earlier 1980s boards and those canvases with either Mary Macha or Waringarri Art Centre provenance. Their inference that all other works were suspect and unworthy of the best collections went uncontested and has continued to prejudice works produced for a number of independent dealers to this day, most significantly those for Neil McLeod. The average sale price of Thomas’s works dipped slightly in 2000 despite previously unabated growth, however it continued to rise none the less, albeit at a slower rate. Art buyers, including those not at all interested in Aboriginal art, understood intuitively that Rover Thomas was an art phenomenon and that his work was the equal of any contemporary artist, having transcended its ethnographic origins. Undeterred in their enthusiasm, they invested heavily between 2000 and 2002 and his prices again rose steeply and continued to do so right through to 2003 by which time they had reached the plateau that was maintained right through to 2005.

This rapid growth was spurred on by the by the National Gallery of Australia’s purchase of All that Big Rain Coming Down Top Side 1991 in 2001. The price tag was $778,750, the highest amount ever paid for an Aboriginal work of art at the time. This record stood until 2007 when eclipsed by Emily Kngwarreye’s Earth’s Creation 1995 and later by Clifford Possum Tjapaltjarri’s major Warlugulong 1976 canvas. The record, for a commissioned work which measured 180 x 120 cm, seemed ridiculous at the time when compared to his previous prices and the presale estimate of $280,000-350,000. Yet subsequent market results proved sceptics entirely wrong. The interest in Rover Thomas as a contemporary artist was underscored by the fact that by 2006 only eight early boards were amongst his 30 highest priced works at auction, and not one of these were included in his top ten results. The closest was produced by the artist in 1985, and stood at number 16. From that time, and until 2008, his results were nothing short of spectacular. Bugaltji – Lissadell Country 1986 became his second highest result when sold for $660,000 at Sotheby’s in July 2006 (Lot 95). The work measuring 90 x 180 cm. was painted in earth pigments and bush gum on canvas. Sold previously through Lauraine Diggins Fine Art it was estimated at $400,000-600,000. Another, Willy Willy, 1995, sold at Deutscher~Menzies in September 2007 for at $456,000 having previously achieved $240,000 when sold by sister company Lawson~Menzies in November 2004 (Lot 45). Prior to 2007 this first sale of Willy Willy stood as the artist’s tenth highest sales record.

Of the 50 works offered only two others achieved prices in excess of $45,000 and only 22 paintings sold overall. No less than 26 failed to attract buyers. In 2012 only 5 of 12 sold for an average price of $29,067 making him the 17th most successful artist for the year. Given that Rover Thomas is the second most successful artist of the entire movement it was a very poort result indeed. 2013 saw a slight improvement with Rover being the 9th most successful artist of that year. While no works entered his top 10 and $36,000 was his best result his clearance rate was more successful at 57%. Only five original works on paper have sold with two falling in the $10,000-25,000 range, while 35 prints have sold from 53 offered. His highest results for graphics have been two works produced by Coo-ee Aboriginal Art. Originally sold in primary galleries for $750, Mt. Newman (State 1) 1996 sold for $10,200 at Sotheby’s in 2003, and Punmu – The Universe 1995 sold for $8,400 at Sotheby’s in 2004.

An aesthetic overview of Rover’s auction results reveals that the power and quality of the image has taken precedence over the provenance or the auction house selling the art. Stilted and darker pieces generally lack appeal, unless the ochre wash reveals interesting sweeps of shading. Works containing figurative elements are popular although those featuring quirky owls, especially when placed in an abstract field, are more highly valued than images with snakes.

With poor results for art auction sales since 2008 Rover Thomas, whose Aboriginal Art Market Index is now 21.784 was unseated as the market leader in 2008 by Emily Kngwarreye whose AIAM100 index is now 26.493. Emily’s was the most successful artist in 2010, 2012 and 2013, while Rover ranked 154th in 2010 due to a dearth of high value works at sale. In 2011 Rover’s total sales bounced back to a respectable $734,410, a ranking of 4th for the year but 2012 was another bad year during which Rover ranked 17th. In 2013 he revived to 9th.Rover Thomas worked under a variety of conditions and  circumstancesduring a career that was of major importance to the history of  Australian art.

His works have been amongst the most highly desired of all Aboriginal paintings and should continue to rise in value over the years ahead. While the steep increase in values seen during the five years following his death are unlikely to be replicated across the board, the best of his works will always be coveted and will continue to rise steeply in value when the art market begins once more to grow toward the next economic peak.